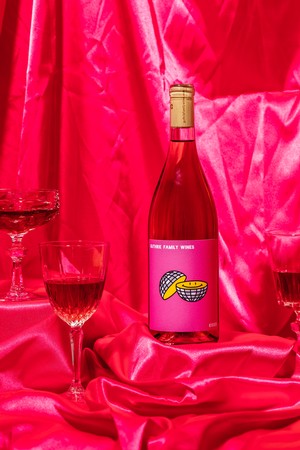 Ok you wanted something different? Roger. Tired of the same old same old? Roger that. Need to spice up your life? Challenge accepted. In a year filled with drought, threat of fire, and playing musical chairs with smoke impact, one must sometimes use just about all the creative thinking skills one has. This was that year. But even in hardship magic can happen, which is just the case for this pink (!?!?!?!) Viognier.

To start our story, we first turn to Italy. What? I thought we were inspired by the wines of the Rhone? Stick with us, kid. The technique was established in the Veneto region, where the term “Ripasso” sounds like and in fact means “repassed.” That refers to its production process whereby regular, fermented Valpolicella (red wine) is added to a cask containing the skins and lees left over from recently fermented Amarone wines. The process of adding (or "repassing”) the lighter Valpolicella wine over the remainders of the “bigger” Amarone wine imparts additional color, texture and flavor to the Valpolicella wine. Now simply substitute that for Viognier wine over Pinot Noir skins, and you have pink Vio! A happy little valentine’s disco ball in a glass, if you will.

We say a lot of funny things when describing wines in these here tasting notes. We acknowledge this. But something is about to be said that you just have to trust. Proceed with an open mind. It gives… a fresh can of tennis balls on the nose. Seriously! While the traditional medium bodied weight of Viognier is ever present, the ripasso technique lends a hint of bitterness from skin contact that enlivens every single dang thing happening in the glass along with golden apple, tangerine, and rose.